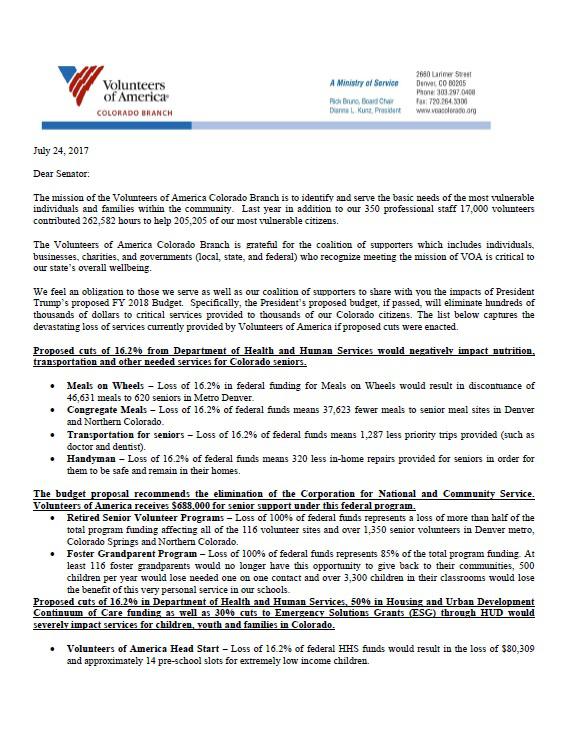 “We need congress to vote no on Donald Trump’s proposed budget.” Volunteers of America Colorado Board of Directors member, Michael Beasley, explained at a recent board meeting. “We owe it to those we serve, and to the donors we may later ask to supplement the shortfall, that we fight as hard as we can to prevent these cuts.”

President Trump’s proposed budget would cut nutrition services, senior support under the Corporation for National and Community Service, and transitional and supportive housing assistance for children, youth and families. Some of the programs potentially impacted include Meals on Wheels, case management for youth and families, housing support for homeless women with disabilities, and head start preschool – leaving many hungry, homeless, and without resources. Meals on Wheels, one of Volunteers of America Colorado’s largest programs, could be forced to discontinue more than 46,000 meals to 620 seniors.

“Without these programs, many people will no longer receive basic services they need to survive,” Dianna Kunz, Volunteers of America CEO and President, said. “We’ll see formerly homeless individuals pushed back into homelessness. We need to be engaging our elected officials.”

Volunteers of America Colorado’s services could be crippled as a whole by these cuts and executives are urging supporters of the non-profit to contact their legislators in opposition to the current budget proposal.

ABOUT VOLUNTEERS OF AMERICA

Volunteers of America is a national, nonprofit, faith-based organization dedicated to helping those in need live healthy, safe and productive lives. Since 1896, our ministry of service has supported and empowered America's most vulnerable groups, including the frail elderly, people with disabilities, at-risk youth, homeless individuals, women in need, and veterans and their families. For more information about Volunteers of America, visit www.voacolorado.org