Food for Life; Food for Friendship 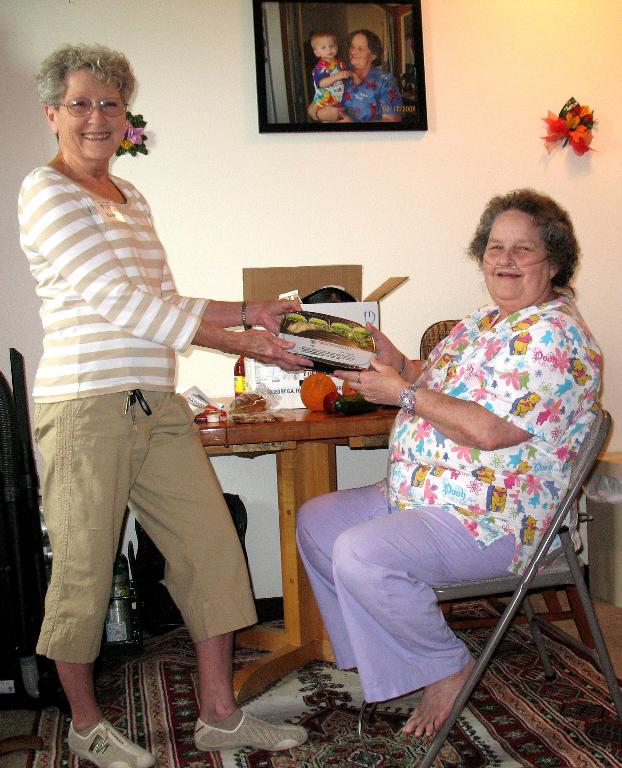 Early in 2009 Dorothy Bentley, 68, was in failing health when her doctor advised her to improve her diet or risk serious physical consequences. For a long time, Dorothy's primary diet consisted of popcorn three or four times per day - but not because she loved the snack. Rather, she lacked the resources for obtaining healthier foods.

Approximately four months ago, Dorothy’s doctor suggested she contact Volunteers of America’s Northern Colorado Meals on Wheels. Now, each week she receives a package containing seven frozen meals and supplemental unfrozen items. Meals are provided on a donation basis, but no client is turned away if they, like Dorothy, cannot afford to contribute. Receiving nutritious meals through the program has done more for Dorothy’s physical health and emotional attitude than either she or her doctor expected!

Dorothy now knows she will have at least one complete healthy meal each day. These frozen, fully cooked meals are easily reheated. Before joining the Meals on Wheels program Dorothy lived with major stress about her economic situation. Balancing her very limited monthly income against the cost of her food, household expenses and accelerating medical needs had made her so depressed her doctor prescribed anti-depressive medication. Now, however, the nutritious and tasty meals she eats at least once a day have Dorothy well on the way to improved physical and emotional health.

Dorothy’s doctor tests her blood monthly. Within the first full month of participating in the frozen Meals on Wheels program, her doctor found Dorothy’s sugar levels, and other health indicators, were dramatically improved. Dorothy herself noticed improved energy and stamina since enrolling in the Volunteers of America meal’s program.

Dorothy also finds other benefits from the frozen meal program, including a major improvement in her emotional outlook. She no longer needs medicine for depression, giving her additional funds each month for food. She also knows that she is cared about and thought of by others. Dorothy says “I didn’t think anyone cared about me anymore. Then my nice delivery person asked how I was doing.” Karen Raymond, an RSVP Volunteer, and Dorothy’s regular delivery person, has enjoyed meeting and chatting with Dorothy each week as she drops off her frozen meals package.

Karen, 70 and retired, moved to Fort Collins from Texas this past year. Shortly after her move, she read a newspaper article about Volunteers of America Northern Colorado Services. Karen says, “After doing for myself and sitting at a desk my whole life I wanted to do something for others. Becoming an RSVP Volunteer fit my idea of who I wanted to be and what I wanted to do.” Once each week Karen picks up several packages of frozen meals (five or seven meals per package) and makes deliveries to people, like Dorothy, who are home-bound and in need.

Volunteers of America’s RSVP volunteers like Karen and clients like Dorothy gain immensely from their participation in the Meals on Wheels program. Volunteers and clients touch each others’ lives in different ways, each benefiting from the other. Making a positive difference in another’s life is a major benefit to the volunteer. To be thought of, cared about and to avoid hunger are major benefits to those receiving the home-delivered meals. These delivered meals are food for life and food for friendship.