Organization Lifts Veteran back on his Feet 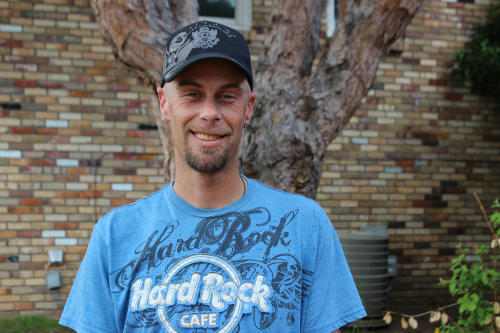 When Jason Flesher returned to the U.S. from Afghanistan in 2003 he was completely broke.

The soft-spoken, now 35-year-old joined the U.S. Army Reserves as a carpenter and mason and in 2002 he was deployed to Afghanistan. Due to circumstances out of his control, while he was deployed his finances were completely wiped out making his return to the U.S. difficult.

He didn’t know where I was going to be one night to the next, he said. And, if finding a place to stay wasn’t trouble enough, Jason was dealing with challenges in returning to civilian life.

“When I first came back I had a pretty rough time, I still have a rough time getting along with people,” he said.

For a while he slept on friends’ couches but quickly Jason found himself living in a shelter for homeless Veterans in Aurora.

“I know a lot of people campout there for a while there and I didn’t want that,” Jason said.

Without a car, getting to work meant spending three hours on the bus. Jason knew there were ways as a Veteran that he could get help however, already spending hours a day on the bus, he did not have the time to seek out his options or knowledge of all the services available for veterans.

Greg worked with Jason to find out what kind of homes would work for him and together they pinpointed some affordable housing option that would also be places he would enjoy living.

Within a couple months, Jason moved into a house with roommates and began working a full time job. The Volunteers of America Back Home program helped him overcome some of the initial hurdles that make securing housing impossible for many people who are homeless, like the deposit and first few months’ rent.

In a permanent home and working full time, Jason was finally able to get back on his feet. However, support from Volunteers of America Back Home did not end there.

“Like most of the veterans I have worked with here, Jason was having problems getting the medical care and disability compensation from the U.S. Department of Veterans Affairs (VA) he is entitled,” Greg said.

The Back Home program helped Jason find legal services and connections at the VA to seek out medical benefits. During his time in the program, Jason also began taking class to earn his certification to become a diesel mechanic.

Though Jason was doing well, his income fluctuated and he found himself behind on his truck payment and rent. He was at risk of losing his vehicle, schooling, job, and even his housing. The Volunteers of America Back Home program helped him apply for emergency financial assistance from a partner nonprofit, The Home Front Cares.

“That helped me get back into a spot where I can support myself; be okay,” Jason said.

While Jason is still working to get access to the some of the medical services that he needs through the VA, he says things have certainly improved.

Jason is just one of the 785 Veteran households the Volunteers of America’s Back Home program serves every year.